A Project for Better Journalism chapter
The Arvada Argos
Sports 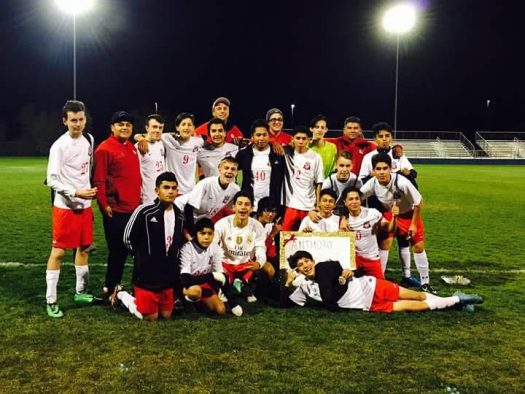 The Boys Soccer Team joined the 4A league this year, and the school noticed a better performance from the players and the coaches. The team ended the season with 6 wins and 9 losses, something that the team has not seen in the last 5 years.

They started the season losing three games in a row just by 1 or 2 goals until they faced Skyview Academy in a four team tournament, where they won 3-2 with a double by sophomore forward Saul Garcia and a goal by junior midfielder Juan Murga. They advanced to the final, where they lost 9-0 against Jefferson Academy.

Later on they had a very close game against Denver North where the Bulldogs lost 3-1.

The team was getting ready for league games, and they showed that with a win against Thomas Jefferson High School  with a “Hat Trick” by junior midfielder Grant Davis. The game ended up 3-2 with a lot of saves by freshman goalkeeper Connor Scott.

The last non-league game was against Thornton in their stadium. At the end of the first half the Bulldogs took the lead with a “Golazo” by senior midfielder Angel Guzman. But the game ended with a big difference of 4-1 with the win by Thornton.

The Bulldogs started the league games with an away loss at Fort Morgan with a score of 4-1, with a single goal by Murga.

Then, the Bulldogs’ winning streak began when they went to visit the Englewood Pirates. The Bulldogs won 2-1 with goals by junior forward Jermaiah Sawaqed and Murga, with a strong defense by senior goalkeeper Antony Monroy.

Two days after, the Lobos of Conifer visited Arvada, and with two goals by Murga and a goal by Davis, the Bulldogs won 3-1.

According to the team, the best game was against the Blue Devils of Fort Lupton. The first goal came at the minute 15 when Murga passed to junior forward Sergio Garcia for the score.

Before the first half ended, the Blue Devils took the lead in the game with a score of  2-1. At the beginning of the second half the Blue Devils scored again and made the game more difficult for the Bulldogs. Despite the growing lead, the Bulldogs never lost their faith and they kept fighting.

“It was the best game because we didn’t give up, and we played as a team” said head coach Neil Magor.

“Definitely the best game of the season” said junior captain Max Pettit, “Coming back from a 3-1 with Fort Lupton, tied it with two minutes left, going to double overtime and the fricking last minute goal, scoring, winning the game. That was amazing. In double overtime, that was amazing.”

The streak ended when they faced the top-ranked team in the league the Wolverines of Skyview. The Bulldogs lost 3-0. The next game they lost again against Alameda 3-1 with a goal of Saul Garcia.

The last game of the season Arvada played against Weld Central. With two goals by Davis, a goal by Lopez and a goal by Murga, the Bulldogs ended the season with a win of 4-1.

Overall, the Bulldogs had a successful  season, and they are optimistic about a better season next year with hopes of going to playoffs.In order to do so, they are looking forward to some more strong players to replace graduating members.

“I think we just need to go to middle schools and get more kids to play, and advertise that we are a good team so they can play with us because we need them,” said Max Pettit.