Are Students Being Sent to School or Prison? 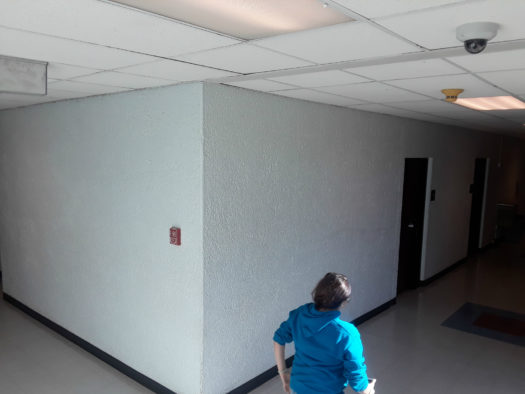 ▲
Security cameras are set up around the school to monitor students.
Photo by Oriana-Pearl Thomas

▲
Security cameras are set up around the school to monitor students.
Photo by Oriana-Pearl Thomas

Schools aren’t only a place of learning. There is more to a building than what schools let on. Not all students enjoy going to school, yet it could be considered a necessary evil. Students question the atmosphere of their school because even though it is supposed to be a place for education, at times it can feel more like a prison. When one person acts out it is reflected in the expectations of all.

The way schools are designed is no accident. Kids are expected to do what they are told and uphold the rules. Punishments are implemented according to the offense.

When students go inside of a school, they see long, bland hallways, lockers up and down the walls, and classrooms sharing the same walls. While there is not always that feeling of happiness at school, there can be small communities that feel positive, whether that be in a familiar classroom or even just a group of friends.

Schools also generally enforce a dress code. Students can’t wear anything gang related or violent T-Shirts. All pants, skirts, and shorts have to be long in length and nothing can be worn advertising drug use or sexual. Simple things like showing skin, such as shoulders, is limited and monitored in schools.

Students who go to school are constantly watched and monitored, just like the prisoners. There are cameras everywhere you look, there are security guards patrolling the hallways, and a Student Resource Officer (SRO) is usually at the front of the building.

According to Scott Smidt from Public Schools or Prisons, “Just about every fact of a students movement, behavior, and interactions with others is monitored and regulated, and often strict punishments are handed down for seemingly minor infractions that outside of school would be considered normal and expected behavior.”

If the rules and security at school are put in place to keep students safe, then why haven’t measures been taken to help students feel more safe, instead of under more control? Some of the rules at school are nonsensical and are enforced more than the rational rules, which aren’t enforced enough.

“Order, maintenance, policing and steep penalties that are for minor infractions push out students of color, denies them access to education, and sometimes it even initiates a criminal record that increases the likelihood of subsequent imprisonment,” Amber Wiley from the Aggregate Schools and Prisons article, said.

Sometimes when students attend school, they feel like their own identities are pushed aside and the behaviors they have learned from their lives outside of school are undervalued.

“You are forced to basically not do what normal teenagers do,” junior Ryann Burritt said.

When students go to school they are expected to sit down and follow the rules. Schools are supposed to be a “safe learning environment” but when teens and children are taught to hide their true colors or to behave differently from a normal teenager, it takes away from the alleged safe space and even the overall environment of the classroom. The students are constantly told to speak up, but when they do, their ideas can be shot down or not listened to, creating a more prison-like atmosphere.