The Night of Empty Bowls 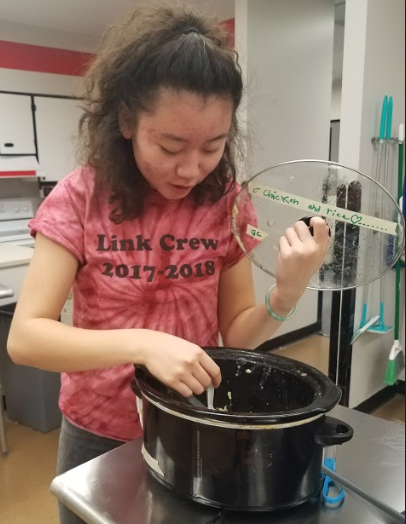 ▲
Vivien Tran tastes the Chicken and Rice Soup after Empty Bowls is over for the night.
Photo by Vivien Tran

▲
Vivien Tran tastes the Chicken and Rice Soup after Empty Bowls is over for the night.
Photo by Vivien Tran

Arvada hosted the annual Empty Bowls fundraiser, in which all community members are invited to attend. Thanks to fellow students and staff, the event turned out to be very well organized and very successful.

According to science teacher Leslie Durant, the school was able to raise $3570. Everyone’s participation and donations of food and pottery pieces are what made this event possible.

According to science teachers Rick and Leslie Durant, this was our “19th year running our charity event to help fundraise food for the Arvada Food Bank’s Community Table”. However, part of what made Empty Bowls such a hit for 19 years was the soup.

There was a variety of homemade soups, cooked and served in crock pots. According to math teacher Elizabeth Kantner, an estimate of nearly 200 people attended the event. Staff from schools, such as North Arvada Middle School, Swanson, Hackberry, and more supported the fundraiser with an individual crockpot and on top of that, the Arvada staff brought in their own specialties of soup.

Students from the new extracurricular cooking elective participated in the event by coming up with their own soups in a crock pot. According to Culinary Arts teacher, Emily Duncan, there were about 55 crockpots ready to be served the night of Empty Bowls. Of course, many of the students didn’t just stand and watch event the pass by. Tri-M members did a performance, NHS and Student Council members helped run errands, serve food, and clean up in the aftermath.

Since I was part of the cleanup crew, I had the opportunity to “sandbag” (as Duncan called it) whatever was left of the soup, and I have to admit, all of the soups were without a doubt, very delicious. But, I’d have to say that it was a hard choice narrowing down the variety of options I had to the top four best soups. The Cabbage and Steak made it to my list as the fourth best soup, although the chef is unidentified. To whoever made this, I’d have no problem if they invited me over for dinner.

The Cup of Penne Soup made by Cindy Campbell gets a star for not only fantastic taste, but also for being a healthier option. She included a variety of her veggies: celery, onion, zucchini, basil pesto, spinach, and garlic. On top of that, she added some chicken, penne pasta, and the seasoning that you could never go wrong with…salt and pepper.

Now as an Asian, I could never go without my rice, so of course, I said that the Chicken and Rice Soup was my second best. I might’ve had some bias, but the most simple dishes are the most valuable ones (says no one). The label even had a heart on it so how could I not love it? Of course like any other option labeled as the top, the best is saved for the last. Though this soup came second to last, I have to say that this one sent me to the moon.

It may be an exaggeration, (or it may have just been because I was still hungry), but the Broccoli/Potato/Cheese Soup was one that was recognized not just by me, but junior Alonso Rodriguez who was also on cleanup duty after the fundraiser was over. A special thank you to everyone who put so much effort into their soups that many people enjoyed. Without the staff and all the student organizations, Empty Bowls wouldn’t have been as successful without them. Furthermore, here are a special thanks to the Durants who have been running this event for 15 years. This year was their last and the school is thankful for all their hard work and dedication. 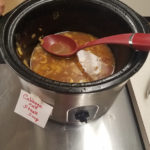 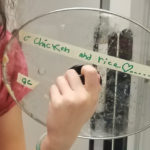 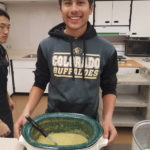 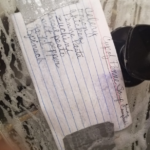 The Cup of Penne Soup made by Cindy Campbell